Say Cheese! Part 2
10 Unusual Cheeses to Try and 10 That Are Too Weird for This World. 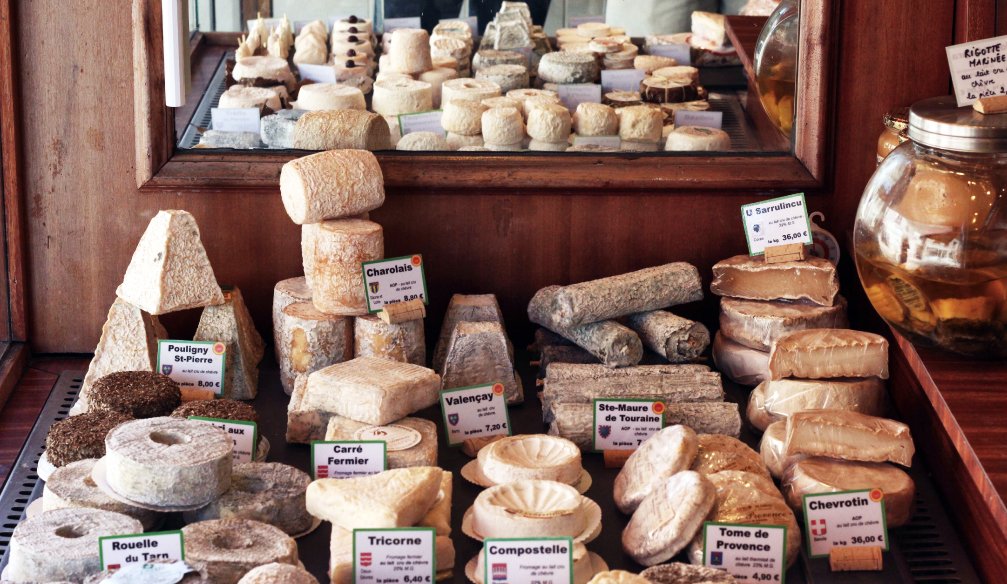 The first cheese was allegedly made 4000 years ago and it has always been one of people's favorite food and ingredient, with cheese production always being one of the most profitable branches of the food industry. Even today, when the number of people avoiding animal products is constantly growing, the production of cheese has not been disrupted – it was just altered to offer a great variety of vegan cheeses as well.

And no matter if it was served as a fancy snack for wine degustation, as party food, or used as an ingredient for our dinner, cheese is always welcome and gladly eaten. Wait, is it always? Not necessarily! Even though our first thought of cheese is the mozzarella without which we can hardly imagine a succulent pizza, the cheddar which is a standard guest in everyone's favorite Mac and Cheese, or the American cheese that makes the McDonald's cheeseburger so deliciously cheesy, apparently, there are certain kinds of cheese that are just too weird and too gross to be listed as edible, and not to mention a favorite. At times, the desire to make something unique and uncommon has gone too far and the final product is just too eccentric for this world. Maybe in some far future, those kinds of cheese will become a staple, but for now, they are staying on the "No, Thank You" List. However, there are also a lot of less-famous kinds of cheese from all around the world, that certainly deserve our attention and a chance to become our first choice for our next meal. So, here it is – the ultimate list of friendly suggestions for 10 unusual kinds of cheese you should try and 10 to avoid.

Coming from the eastern parts of France, this cheese made from unpasteurized cow milk is considered one of the finest cheeses in the world. It is matured from 4 months to up to 2 years in special caves where it gets its unique texture, color and flavor. Each slice of Comte cheese offers an interesting texture that can vary from silky, flabby to crystalline. And the most incredible thing about this cheese: believe it or not, while tasting Comte you can feel exactly 83 different flavors with brown-butter and roasted nut being the most prevailing. 83 flavors… That’s just amazing! 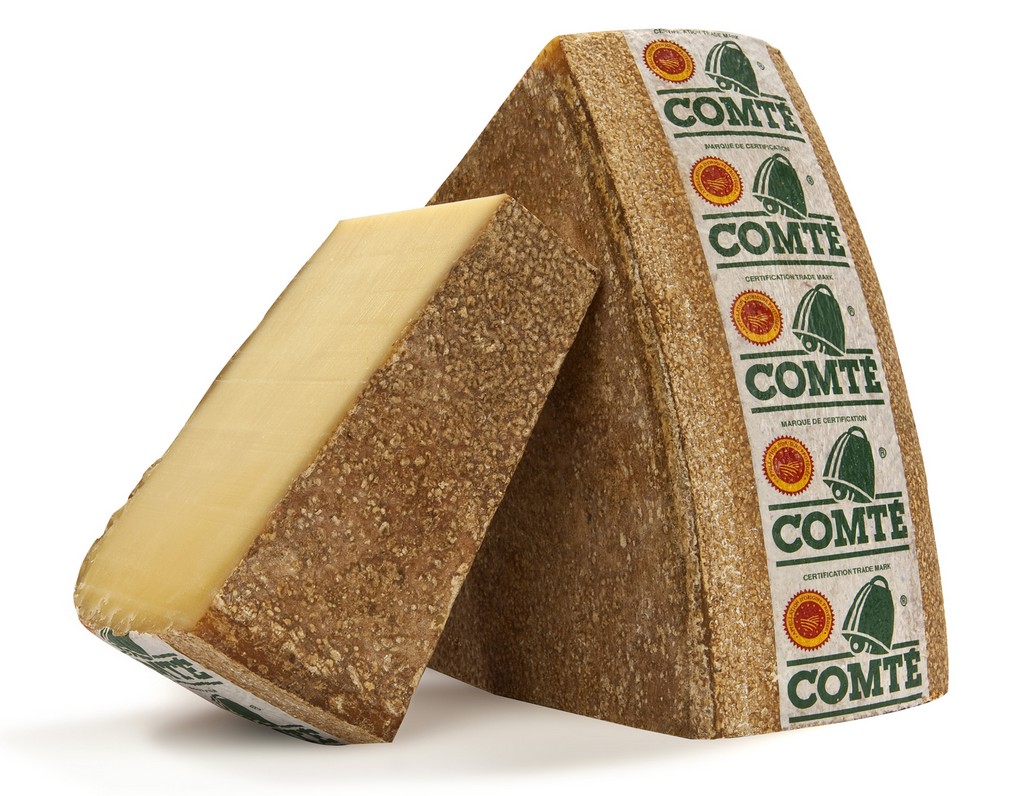 Yes, this is a thing! “Deliciously creamy”, “Mild, hard cheese that crumbles in your mouth”. Those are some of the impressions shared by people who tried human milk cheese as a part of a university project and without knowing what is the key ingredient. And their reaction after finding out – anything from curiosity to disgust.

It is true that we consume breast milk as a baby, and it is also true that it is one of the best things a baby can get, but eating (or drinking) it as an adult – it just isn’t natural. It definitely goes on the Avoid list.

This hard cheese combines the flavors of Parmesan and cheddar. Each wheel is hand-rubbed with cracked black pepper before ripening, which gives it the unique appearance and flavor. Black pepper’s flavor is present in each bite, but discreetly enough not to prevail the flavor of the cheese which is otherwise mild and quite neutral. In short, this is an enjoyable cheese that could refresh the cheese board for your next party or enrich your next Mac and Cheese with piquant but gentle bites. And unlike other cheeses from this list, it is available in the stores and for a very affordable price. 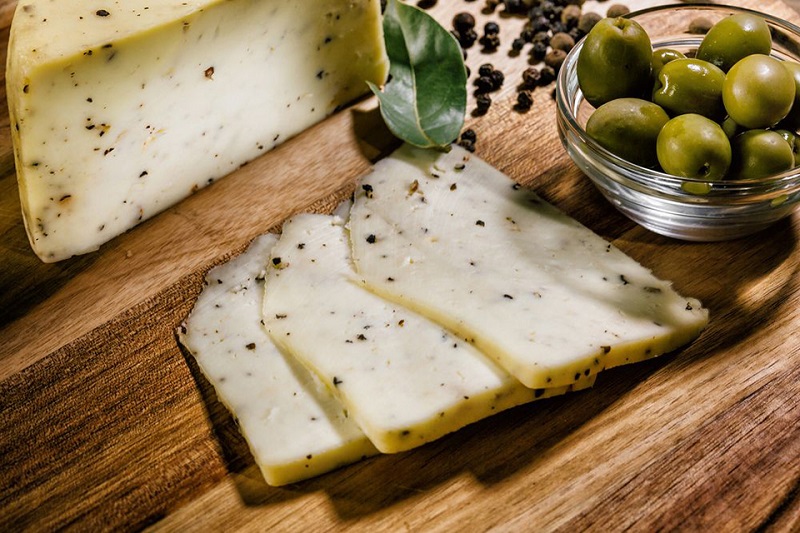 This aerosol-based spray cheese product can barely be called cheese. Spraying it out like shaving cream or paint sounds crazy and fun, but eating it – not that much. The processed cheese with characteristic strong orange color is a mixture of milk and water with different additives and agents added to get the creamy half-runny texture. It comes in many cheesy flavors: cheddar, sharp cheddar, American cheese and cheddar with bacon, with some occasional unusual flavors like onion, pizza and shrimp cocktail. Spray cheese may be the favorite of many people, but considering that it has little to do with real cheese, it should definitely go on the Avoid list. 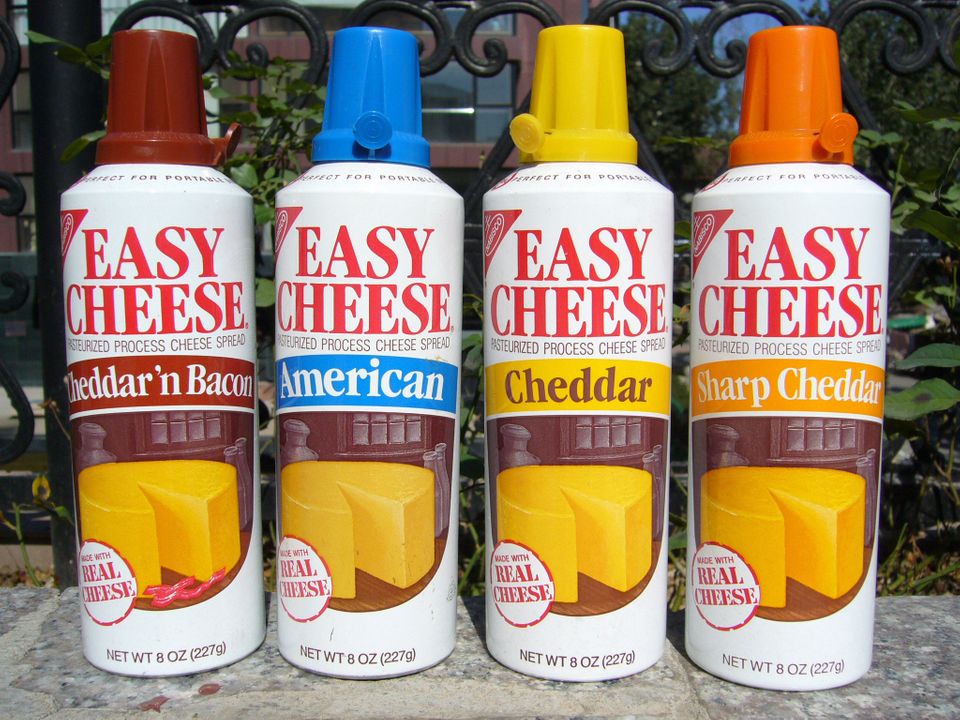 This cheese from the Bella Vitano brand brings Parmesan to a brand-new level! Inspired by traditional Italian farmstead cheese, this premium-class rich, creamy Parmesan is enriched with nutty and fruity flavors with raisins being the most noticeable. And what makes this cheese unique is the final touch – it was gently bathed into balsamic vinegar to get an unforgettable sweet aroma and flavor. This surprising and sharp twist on a classic type of cheese has brought the company a few gold-medals and honors from several respected cheese competitions around the globe. Nevertheless, its price is affordable so don’t hesitate to try it! 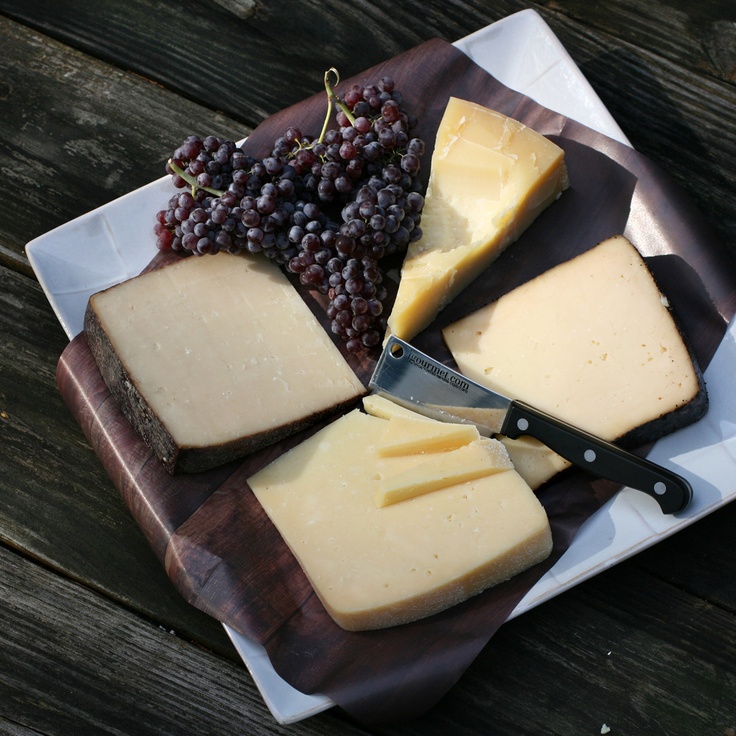 Mimolette or Boule de Lille is a super hard cheese from France that is infamously known for being difficult to open and cut. Its mesmerizing electric orange color is certainly unique, but it’s not the only thing that will make you notice this cheese – it also has a very pungent odor due to mites included in the ripening process. One of its popular names translated from French means “stinking pickle”, and it absolutely goes in favor of the fact that aged Mimolette is known as one of the world’s strongest cheeses! All of this combined with its strong salty flavor, makes Mimolette a cheese to avoid, especially if you have a sensitive stomach. 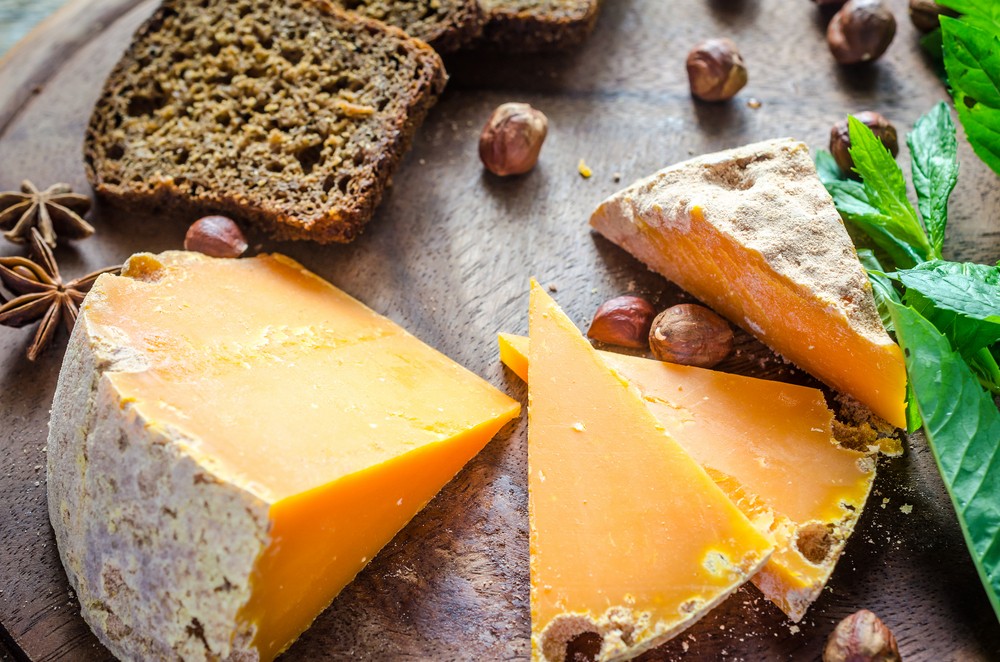 Grilled cheese is great for BBQ days. In fact, grilled cheese is great any day! And this Halloumi cheese is one of the best cheeses for grilling as it barely melts– therefore, it is also widely known as grilling cheese. Originating from Cyprus, the Halloumi is a soft curd-like cheese made from sheep’s milk, that has a rubbery texture when eaten plain. But it is not meant to be served plain – it should be warmed, grilled or cooked, which will turn each rubbery bite into creamy delight. It is often called “the marshmallow of cheeses” – eaten plain they are nothing special, but when properly roasted over open flame they both become beautifully crispy on the outside and melted on the inside. It bought me! 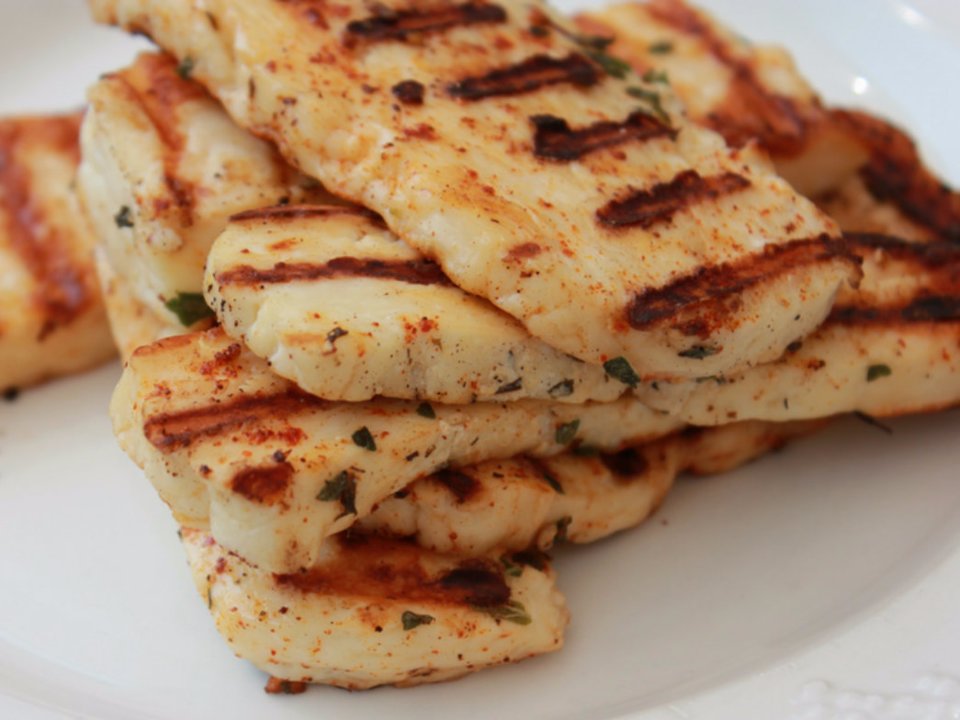 The classic Stilton cheese, a semi-soft yellow cheese with magical blue veins radiating from the center, which is a trademark of England is certainly one of the most appreciated kinds of blue cheese. However, a few years ago, unnamed cheese maker decided to bring Stilton to a new level by creating a Golden Christmas edition that cost £60 per 100g, which is 67 times more expensive than standard Stilton. And why it was so expensive? Because it contained real edible 24 karat gold! However, anything that has edible gold inside, was it cheese, or pizza or cake, it just loses its gourmand magic and grows into something that could be called running for publicity. Therefore, a big no for the golden cheese. 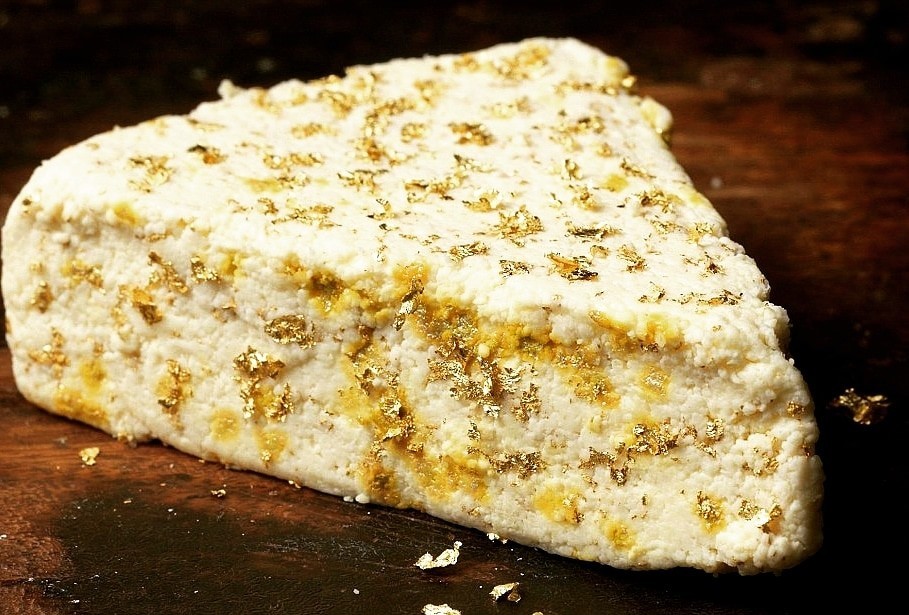 Camel milk is something exotic and unknown to most of us, and cheese made from camel milk is even more unusual. Camel milk is known to be low-fat, which means it yields very low cheese production. However, a cheese company from the UAE succeeded in sending the first commercial batch of camel milk cheese on supermarket shelves in this country. The cheese was made in three varieties: Nabulsi, with caraway seeds; Akkawi, soft unripen white cheese with smooth texture and mild flavor; and traditional cottage-cheese-like with sharp taste, and all three have a fat content far lower than any other cheese. Interesting, exotic and healthy – three reasons to try some of the three varieties! 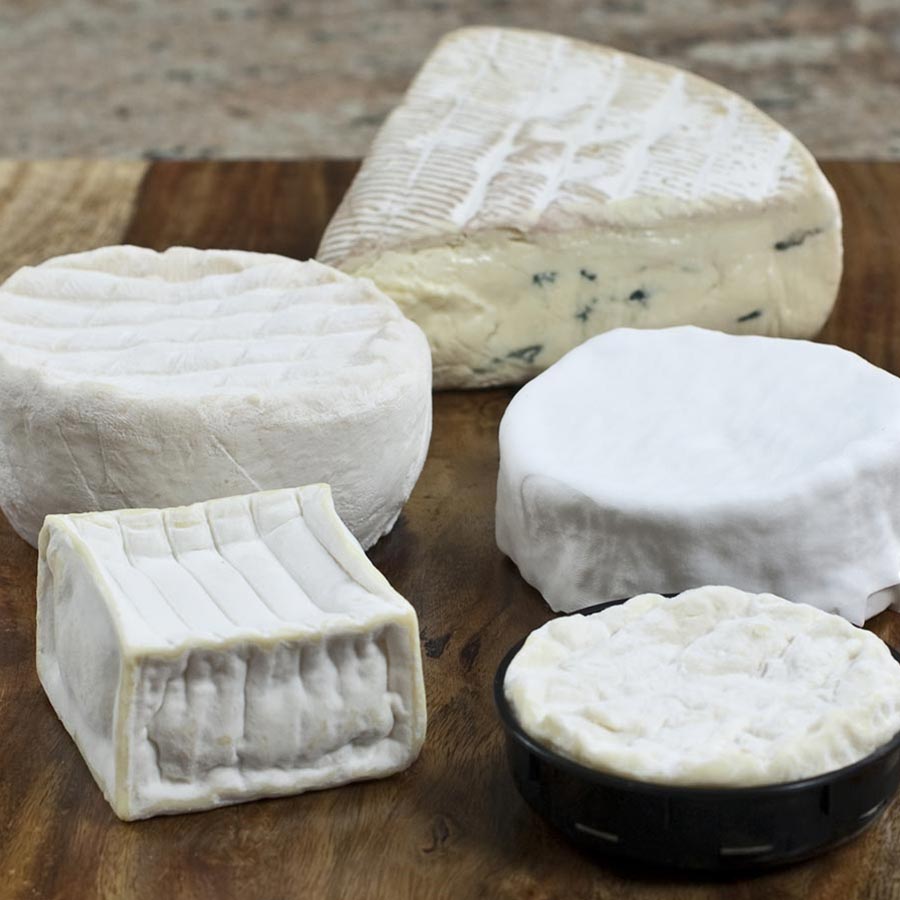 According to scent artist Sissel Tolaas, cheese and body smells are often associated. That is how she and microbiologist Christina Agapakis came to an idea of collecting bacteria from the moths and toes of volunteers, cultivated the bacteria and then incorporated it with milk to create farmhouse cheddar and cream cheese. Since each piece of cheese was representative of each donor’s unique bacteria, the two creators called their piece of art “Cheese Portraits”. Not sure if visitors were allowed to taste the cheese and more importantly, if they were willing to, but one thing is sure if you ask me – I wouldn’t be the one to experiment and see the consequences of eating this unique stinky art work! 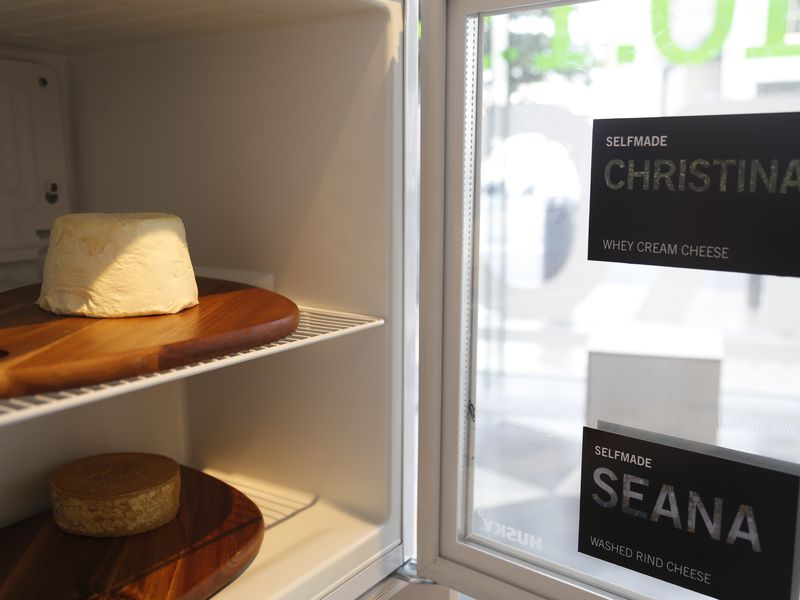 That’s it for this one, if you liked it, please, be sure to share it with your friends, also if you haven’t read Part 1 hurry up and go for it.

Previous article
A Date with the Darkness
Next article
Our YouTube channel
Popular articles
0 1
Dec 31, 1969
Social Networks
Other Articles