The Earth at Gunpoint
If you, like our team, are concerned about environmental issues, share this article on social media with hashtag #db_ecology. 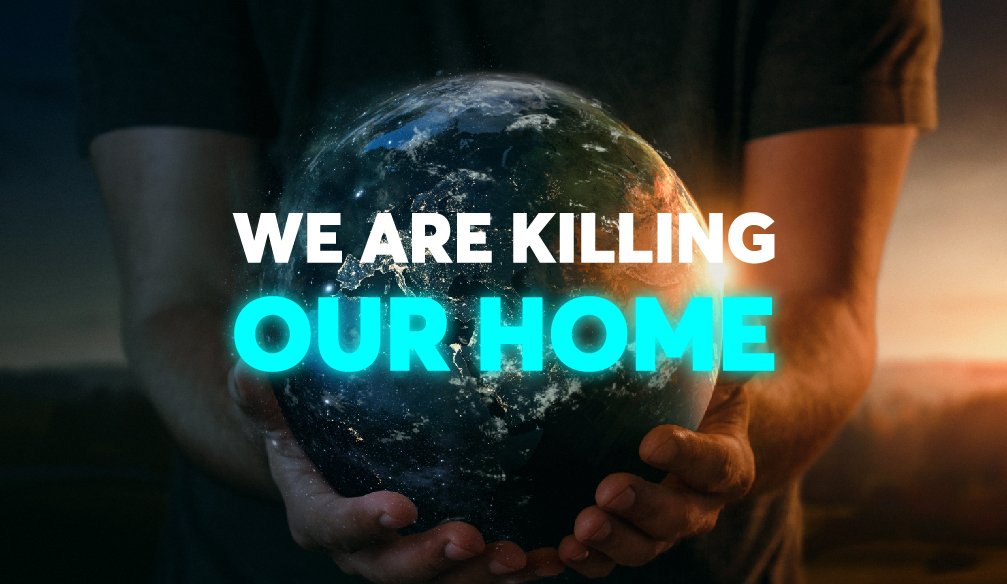 The Earth at Gunpoint

Climate change is a global environmental problem that has existed during all existence of earth. With the advent of human society, and as a consequence of the destructive activities of man on the planet, the situation is getting worse. These include deforestation, waste in rivers and seas, pollution of the oceans with garbage. Humanity is developing, and the situation on the planet is becoming sadder. With the invention of gasoline, after the appearance of chemical plants the saturation of carbon dioxide in the atmosphere increases. Given the current environmental situation on the planet, there can be no question of climate stability.

We conducted a survey for DB Advisors users within Classic’15 debates. Our goal was to find what they think about such a sensitive topic as ecology and its protection. Our team shares the opinion of experts about the fact that if we do not think about tomorrow today, about where and how our children and grandchildren will live, we can lose our tomorrow.

So can we forgive progress for harming the environment? More than half of our users (53%) think no, as our appetites get bigger and bigger. However, 27% of respondents said that the damage is justified, as we will soon find a solution to environmental problems. 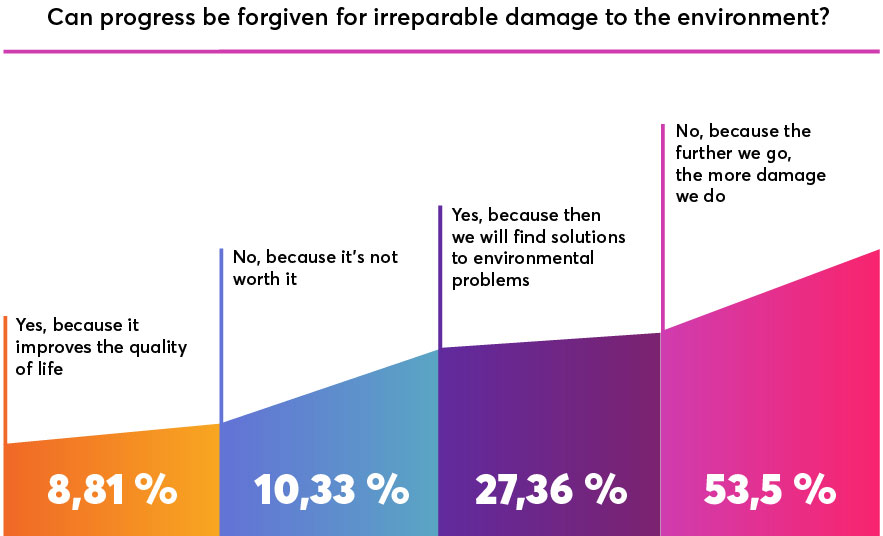 But what aspect of ecology can have a significant negative impact on us? According to our respondents (40% of the total number of respondents), the shortage of fresh water will bring the most problems. Indeed, today more than 40% of the world's population suffers from a shortage of drinking water. These are mainly countries of Africa and Central Asia. Forest fires (21%) and melting glaciers (19%) come after. Smog is the least of our participants' concerns (7%).

We were interested to know why we are causing it so much harm and pain and why the environment is so important to us. Exactly half of the respondents said that "We think only about meeting our needs" (50% of the respondents), fewer, but still many people say that we are not able to realize the consequences of our actions (31%). The majority's answer to the second question was "It is the cradle of life on Earth" (30% of all answers), the next most popular option was "We are not the only living beings on the planet and should think about the rest" (27%).

Since we're talking about our smaller brothers. The situation with representatives of fauna and flora is far from satisfactory. About a million species of animals and plants are endangered. The list of extinct animals caused by man is much scarier. We asked respondents to choose which animal suffered the most because of our activities. The Tasmanian wolf got the majority of votes (40%), and the Chinese river dolphin got 35% of the votes. 19% scored Quagga, and Steller's sea cow got 16% of votes. It is a bitter reminder for us that there are animals around the world that are in danger and need our protection before it's too late. 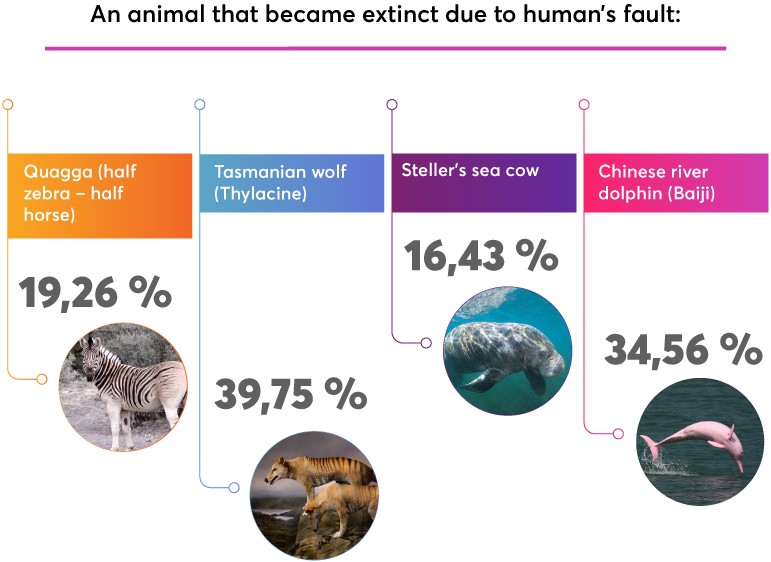 How, then, can we fight the deterioration of nature? For example, air pollution and methods of combating it is one of the topical issues. Half of the respondents believe that we need to move from classic fuels to an environmentally friendly alternative one. 30% of respondents voted for the replacement of coal and fuel oil at thermal power plants for environmentally friendly fuel one. What about pollution of the hydrosphere? How do we influence it more? Pollution of drinking water by man-made drains (62% of all respondents) is our number-one issue when considering the issue of water. Polluted water and unsanitary conditions are the main drivers of epidemics and child mortality in developing countries. The second most important impact on the hydrosphere, according to our respondents, is the construction of irrigation canals, reservoirs, etc. (20% of votes).

Targeted policies that reduce energy consumption have proved effective. Respondents preferred the use of solar panels (53% of respondents) and water economizers in the taps (20%). They will help to have a positive impact on society through the gradual instilling the habit of caring for resources.

People need an incentive to change their behavior and start treating nature more consciously. But, what factors influence that? Most respondents believe that the education of a person (34% of respondents) and the level of his general awareness of the problem (30%) speak about his attitude to the environment, but do not cross out the family factor (24%), because, your family members are the first who teach you the world.

We wanted to know how our users take care of nature. The answers were divided almost evenly: 34% of respondents are planting and feeding homeless animals; 31% of voters remove the trash from the streets on occasion. and make donations; 27% actively share new information with the acquaintances and interested in environmental issues. 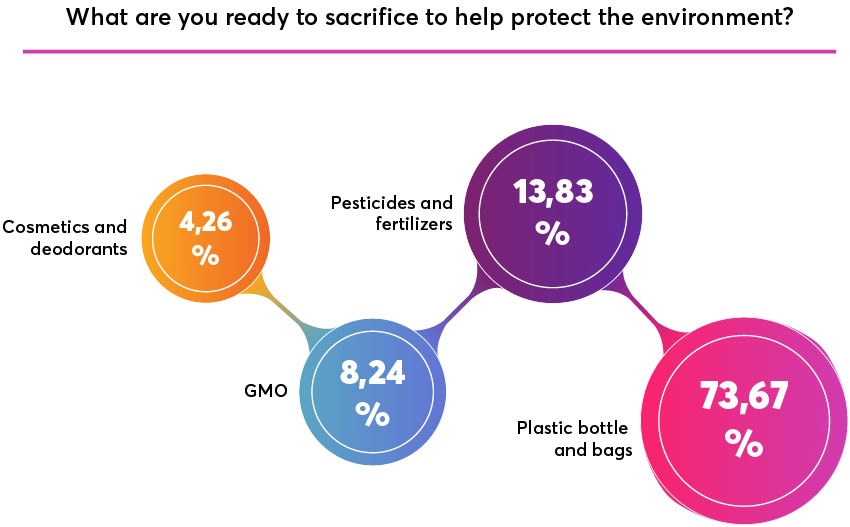 With the invention of products produced chemically, the problem of their decomposition torments many bright minds of the planet. Elements that are not peculiar to the Earth (plastic, cardboard, refined metal, electronics, glass) decompose inexcusably long in comparison with natural materials that humanity has used for centuries. Wood decomposes faster than steel beams, and stone is an environmentally friendly material unlike concrete or brick.

Our industrial, household and technical waste cause inexcusable irreparable harm to the environment, which stimulated the global trend of waste recycling and reuse of products produced from it.

People began to think about ecology on a global scale back in the late 18th and early 19th centuries. Such prominent scientists as Wallace and Möbius were at the forefront of development and introduced the concept of biocenosis into science, and Charles Darwin who structured living creatures according to classes and orders. But Professor Vladimir Vernadsky can be called the rightful father of ecology. In the 1920s he formulated and taught his doctrine of the biosphere.

Today, at least once people heard about the problems and dangers that threaten us. We can already see the consequences of some of these problems. This is a different pandemic breaking out in developing countries because of a lack of proper attention to sanitation and medical services, deforestation that leads to reduction of vegetation areas and, consequently, to a reduction of oxygen level in the atmosphere, leading to desertification and general degradation of the upper, fertile layers of the soil, which deprives us of the opportunity to restore this area in the future. Our global industry has given us an unprecedented leap in technology, but on the flip side of the coin lies the problem of depletion of natural resources. We would like to remind you that it is impossible to restore these resources, we need to look for alternatives again.

Human culture speaks about the end of the world, perhaps, from the very moment of its origin. The first mention was found in ancient Egyptian and Indian legends and myths. The Flood was one of those legends mentioned in the scripts.

We can remember the meteorites and space threat is literally hanging over us. One such meteorite has already doomed the dinosaurs to extinction. Although the probability of another such meteorite falling is very small, it still exists.

In the scientific sphere, the problem of the end of the world also exists, but here everything is much more complicated. Until recently, humanity did not have a tool strong enough to destroy all life in the world, and doom to long years of torment all that is left after. The discovery of atomic energy and the invention of the atomic bomb have given rise to unrest and debate about the dangers of possessing such power and the consequences if such weapons end up in the wrong hands. Atomic war hangs over the global world like a sword of Damocles.

The Ice Age is also able to put an end to the existence of all living things. Not immediately, but gradually plants and animals will begin to die out, and the remaining will adapt. People, in turn, will hold out right until they run out of fuel to heat their houses. 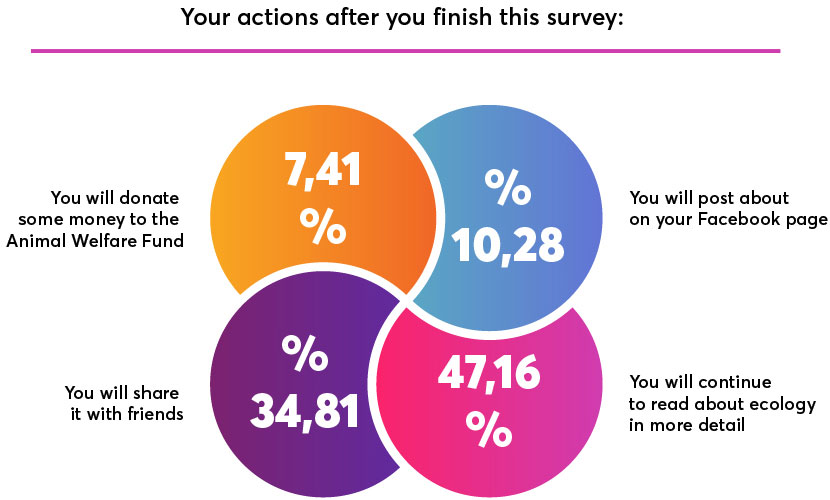 From the above-mentioned, the solution to our problems becomes quite obvious – the fate of the world lies in our hands, in the hands of every inhabitant of the planet. We are very pleased that our users share our vision of this situation and hope that they are as we doing in good faith when it comes to taking care of our home. We don't want to kill our house. Will we be able to save the world or become its executioner? We will find it out one day. If you, like our team, are concerned about environmental issues, share this article on social media with hashtag #db_ecology. Take care of nature and take care of yourself.