La La Land – A Dedication to Fearless Dreamers…
36.11% think that the film righteously qualifies for the nomination “Best Picture”. 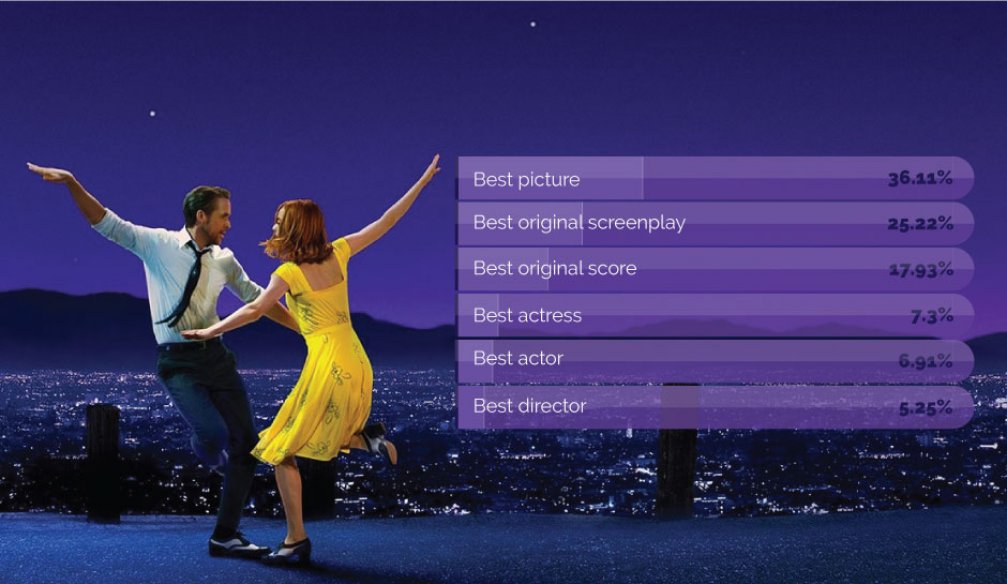 All the merits in cinematography are evaluated at the end of the year by different awards. One of the most prestigious and significant ones among them is the “Oscars”. The nominees for this cinema award were announced on 24 January, 2017, in Los Angeles. One of the favorites of the season is the American tragicomic musical by Damien Chazelle, the “La La Land”. The participants of our previous survey were to decide which one of the nominations the film was more likely to win in. 36.11% think that the film righteously qualifies for the nomination “Best Picture”. Another 25.22% say that the original screenplay is its best quality. The musical is full of great music, which it is also nominated for. 17.93% appreciated the film for its music. Another 6.19%, 7.3% and 5.25% said that “La La Land” deserves an award in the nominations of “Best actor”, “Best actress” and “Best director” correspondingly.

The musical became the leader in the number of nominations, having repeated the records set by “Titanic” in 1998 and “All about Eve” in 1950. The film is presented in 14 nominations, including “Best Picture”, “Best Actor”, “Best Actress”, “Best Director”, “Best Original Screenplay”, and “Best Cinematography”. Two songs are up for the “Best Song” nominations. Interestingly, Damien Chazelle’s “La La Land” already has seven “Golden Globe” awards. None of the films has managed to win so many awards just yet.